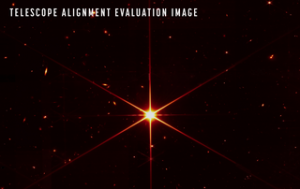 Webb is the first telescope to use a segmented primary mirror for its design.

The segmented primary mirror is composed of many mirrors to form a single mirror.These mirrors are generally used in the largest ground based telescope on earth.

The length of the primary mirror is 21- foot and 4-inch and it is made up of 18 hexagonal , beryllium mirror segments. It was made in such a way that it would be folded up during launch and then it would be unfolded in space before the adjustment of the mirrors within nanometers to form a single mirror surface.

After the completion of critical mirror alignment steps, NASA’s James Webb Space Telescope team expects that James Webb’s optical performance will be able to achieve the goals with which  the observatory was built .

“Fine Phasing “, the stage of alignment , has been completed by Webb’s team and has also aligned the Near Infrared Camera to the mirrors. It has already been aligned and focused on a star said by deputy optical telescope element manager for Webb.

While commissioning  the James Webb Optical Telescope Element, every optical parameter that has been checked and tested is performing expectedly or above its expectations.

There are no critical issues and no measurable contamination or hurdles in the Webb’s optical path. The observatory is able to properly gather light from distant objects and deliver it to its instruments without any issue.

Despite the fact that it is going to take months for the Webb telescope to send back the views of the events happening in space, after achieving this milestone, the team is positive about the Webb’s first-of-its-kind optical system’s working.

Over the period of six weeks, the team is going to proceed through the remaining alignment steps before preparations of the science instrument.

The team will further align the telescope to include the Near-Infrared Spectrograph, Mid-Infrared Instrument, and Near InfraRed Imager and Slitless Spectrograph.In this step an algorithm will calculate the performance of each and every instrument and then calculate the final corrections needed to achieve a well-aligned telescope across all science instruments.

After this Webb’s final alignment step will begin, and the team will adjust any small, remaining positioning errors in the mirror segments.

Before early May the team is on the track to conclude the alignment of all the Optical Telescope Elements, or before moving on to approximately two months of science instrument preparations. Webb will send its first full-resolution imagery and science data in the summer.

Webb is the world’s most advanced space science observatory and once it becomes  fully operational,it will help solve mysteries in our solar system, look beyond distant worlds around other stars, and probe the mysterious structures and origins of our universe and our place in it.

As said by the associate administrator for NASA’s Science Mission Directorate, the Webb team started to build this telescope more than 20 years ago. This telescope is the most powerful  and the first of a kind telescope to be ever put out in space.To meet the demanding science goals ,the team introduced state of the art optical design.

And it can be said  that the design is going to deliver.